Alex Medjessi is a 66 year old retired family physician who was diagnosed in October 2017 with a right-sided acoustic neuroma, approximately 2 cm in size. 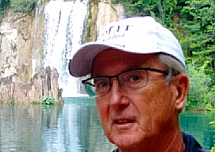 I had been experiencing hearing loss in the right side with some buzzing.

I was fortunate to talk with ANAC’s Executive Director, Carole Humphries, very soon after my diagnosis. She was very supportive and knowledgeable and put me in touch with the fantastic support group in Kitchener, which just happened to be meeting one week after my diagnosis. I found it so helpful to chat with others who have an acoustic neuroma. Some were “watching and waiting”; others had decided to undergo Gamma Knife Radiotherapy or surgery.

With Carole’s help, I obtained an appointment in November to see Dr. Zadeh, a neurosurgeon oncologist at Toronto Western Hospital. We discussed the risks and benefits of Gamma Knife and surgery, and she recommended a follow-up MRI in six months.

I also saw Dr. Parnes, ENT specialist at University Hospital in London, Ontario. He recommended a follow up MRI in April 2018 with the possibility of having surgery, explaining to me the benefits, risks and complications of having surgery to remove the acoustic neuroma. Stereotactic radiation surgery is not available in London.

While away in Florida for five months, my condition stayed the same. Upon returning, I had a repeat MRI done in April 2018 with a follow up appointment with Dr. Zadeh. My acoustic neuroma had grown slightly and, after discussing my options with Dr. Zadeh, I decided to go ahead with radiosurgery. She expressed that “I was a good candidate for treating the tumour with Gamma Knife.”

In May, I attended the Gamma Knife Clinic at Toronto Western Hospital (TWH) where I met with Dr. Gentili, a neurosurgeon and Dr. Tsang, a radiation oncologist. An appointment was made for June 26 for pre-op and planning MRI, followed by Gamma Knife on June 27.

The Leksell Gamma Knife is designed specifically for treating lesions in the brain and has the greatest precision and accuracy of any radiosurgery system to date. Although each beam has very little effect on the brain tissue it passes through, a strong dose of radiation is delivered to the place where all the beams meet. Radiosurgery for tumour treatment works by damaging or destroying the DNA of tumour cells so that these cells cannot reproduce or grow. Over time, the brain tumour shrinks.

I arrived at the Toronto Western Hospital very early in the morning and was greeted by the nurse who would follow me throughout my procedure. She offered me some Ativan, which I declined. Dr Gentili injected the local anesthetic where the pins would be placed and put on the Leksell frame with four pins to secure it to my skull. At this point I wished I had taken the Ativan!!

I was taken for a CT scan. The next two hours to determine my individualized plan and start treatment seemed like an eternity, i.e., the radiation necessary for my acoustic neuroma —the strength of the beams, the angles from which they arrive, the number of times they are discharged, and the exact destination based on Dr. Tsang’s orders.

Next, I was helped onto the table and made comfortable while they put on my mp3 player and started treatment. Halfway through my procedure I had to urinate; however, they were able to stop and continue to finish the procedure afterwards. Thankfully, I did not have to be catheterized – a medical procedure that no man or woman relishes that facilitates direct drainage of the urinary bladder.

Once the procedure was finished, Dr. Tsang removed the frame from my head and I was wheeled back to the post-op area where the nurse took my vital signs. My blood pressure was high, most likely due to the pain. I was given a narcotic intravenously. Steri-strips, which are very small and thin, were applied on the pin sights on my forehead. After about an hour, my vital signs were normal, and I was discharged. A follow-up MRI was arranged for March of 2019.

From the hospital, I walked back to the car with my wife and had no balance problems. I felt good except for the pain and some bleeding from the pin sights. While traveling back home, hunger set in and my wife and I stopped for dinner. I was feeling fine.

By the time we arrived home, the only problem I had was that there was still some bleeding from the site and some pain, for which I took some Tylenol #3. Sleeping was difficult that evening due to pain where the pins had been inserted.

However, I felt well enough to go golfing in the morning and walked a whole nine holes. My balance was slightly affected but it did not interfere with my game. After 36 hours there was no bleeding and the pain had subsided. No further medication was needed. The following morning, I went golfing again. My balance was back to normal and I felt about the same as before my surgery. I still have some hearing loss and buzzing in my right ear.